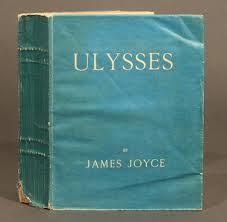 I expected James Joyce’s Ulysses to be dense. I looked forward to it. Was I not equipped for the experience? I had been reading books for a long time; I enjoyed ‘Dubliners’ for its superlative renderings of human beings; I knew the route and streetscape of Ulysses and could picture the settings of the day; I was familiar with the Dublin vernacular and a good mimic of the accent to boot; I had schoolboy Latin hanging on by a thread to my vocabulary (both Joyce and I suffered Jesuit colleges); my Greek mythology was weak but could be bolstered by Wiki-places so yes, all in all I felt well equipped. I was wrong.

In Ulysses Joyce invented a literary voice and for this experimentation and courage he has become justifiably celebrated. This famed ‘Stream of Consciousness’ or ‘interior monologue’  has been emulated ever since, becoming a mainstay of modern literature and giving impressive voice to authors like Jack Kerouac, Salman Rushdie, Joseph Campbell, Samuel Beckett, Flann O’Brien, uncountable others and those yet writing.

To the professional reviewers who have phrased some of the most beautiful language and metaphors ever used to describe a piece of literature I say, ‘bullshit’.

Ulysses is not a good book. Joyce failed the most basic test of any author – to write a readable book. He showed no appreciation for his readers. My reading and comprehension of it took a five week slice of my life. I regret this loss because my remaining lifespan will not permit me to read all the books that I want to (mind you, that might also have been true when I was seven but it seems more compelling now).

I now consider myself qualified to suggest that Ulysses seems to have been written to showcase the author’s encyclopedic knowledge and to impress other writers (e.g. Gertrude Stein’s Paris-based ‘Lost Generation’ of which he was a fringe-dweller). Joyce had an ego big enough to expect adulation. In his early writing career he strongly believed that he should be supported by patronage rather than his having to maintain employment. He once tried to become a European cinema oligarch. He was a genius – and all that comes with that.

Joyce included in this book content guaranteed to compel government censors to ban it, assuring the title of maximum worldwide publicity. This created a frenzy. Travel agencies even sold tours to countries where one could buy a copy of Ulysses until the book finally became available in the UK in 1936 (fourteen years after its first attempted publication in the US). In 1922 a woman friend of Joyce in France had published the first copies privately which were available by subscription only (IR£6/6/0). He subsequently swapped her friendship for a major publishing firm leaving her in debt from the experience and in doing so added to the lore of the book by ‘screwing the lesbian’ who tried to help him. One cannot buy that type of advertising. The suspense of owning the book led to the illiterate buying copies in a foreign language to display on their coffee tables. As a commodity, the eventual publication was on the scale of the stampede for Russian wheat during a Kansas drought. It was today’s equivalent of the iPhone 9. I would argue that the popularity of Ulysses was also due to the rare copies being initially owned by the wealthy. This made it a desirable trend to emulate and a benchmark of literary sophistication to read it. By that I mean snobbery. Failure to understand the book became an admission of ignorance so it had few detractors. The controversy continues to this very day over the editing of the numerous versions (most of the author’s copyrights expired last year).

Ulysses is not a popular seller today because it is not enjoyable, is not easy to read, challenges reader comprehension and isn’t banned. The ‘Stream of Consciousness’ device is available in a choice of books for readers to relax with and enjoy.

As is evident in ‘Dubliners’, one does come across great literary beauty in Ulysses. Joyce is gifted in both the use and abuse of our language. And so I laughed where I came across his humour; felt and smelt the sticky spillage on the floorboards of the pub; tapped fingers to the music; breathed the wet earth of the open grave; caught the cursewords that are the city’s very own and saw the Sandymount sunrise. I so much enjoyed the conjoining of unlikely words that I have adopted the practice myself and am currently annoying all my friends with it. Here’s one of his poetically inspirational compounds with a coining virtually alongside – “the treeshade of sunnywinking leaves”. Show that to your spellchecker.  He delightfully remarks (with perfect sonic rhythm) on the “pluterperfect imperturbability” of a government department; describes the Dublin accent as the “twang in the diphthong”.  For Joyce death is “the debt of nature”; a statue is “Greekly perfect”; woman ambiguously becomes “the cloven sex” and he picturesquely shows “gaslight shining on the growth of paraheliotropic trees”.  He also resurrects  archaic words like coign (angle), pyx (pox), moiety (each of two parts), lesbic (of the homosexual female), gelid (gold). He was indeed worthy of the derivational suffix which is today stemmed to his surname.

Bear with my attempt at a Joycean vignette:  The tax that the tested tender to this treasured treatise is the mental distension of deconstructing the dense descriptions of the only scribalist on this rondure celestial body to have persevered in such ambit of cranioliteral intensity as to rationalise the letter ‘Y’ as being, “the bifurcated penultimate alphabetical letter”. See what I mean? Other readers complain about Joyce’s long sentences (we’re talking multipage lengths here) but I loved each one, challenging myself to hold the train of thought whilst chasing diversions and corkscrewing through an arcane lexicon to the bitter, gasping end. I had some successes – the scant punctuation didn’t help. Sadly such brilliance was outweighed by authorial sins like a change of scene between the end of one sentence and the beginning of the next – without notifying the reader! The same applied to changing persona in the middle of internal monologues. Think about that for a minute; I speak the truth – if you don’t believe me, look it up.

Elsewhere I found occlusion, misdirection, erudition, heavy allegories and Irish, Greek and Latin historical and mythical references that challenge those who consider themselves knowledgeable in such matters (and there was no googling in those days). By the 3rd episode (that’s a sort of chapter to you and me, but not quite because…no; just forget it – we won’t there) I was no longer enjoying myself. I needed help and discovered that ‘Ulysses Annotated’ by Don Gifford was considered the optimal guide. Duly equipped I recommenced with a book in either hand so to speak, and while the fog began to lift somewhat, this hot-air-balloon of a book stubbornly refused to reach an altitude affording views of panoramic insight. It was a visit to fellow WordPress blogger Ben Logan at InJoyce! that gave me the third and final key to Ulysses – this good man referred me to the audiobook directed by the BBCs Roger Marsh and read by actors Jim Norton and Marcella Riordan. This magnificent rendition did indeed demystify and complete my interpretation but also led to my frustration at the need to engage both hands, both eyes, both ears, both brain hemispheres and both stereo speakers to discover one of the most undeservedly famous books in the world. I finished it for the same reason Sir Edmund Hillary gave for conquering Everest – because it was there.

24 thoughts on “Book review: Ulysses is an epic fail”