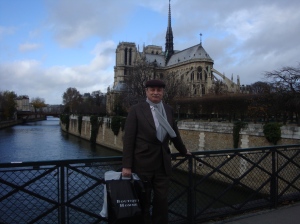 It was still called the “new bridge” though it had now become the oldest of the city’s many such spans. Its medieval arches supported the preferred thoroughfare for tourists visiting the huge Cathedral dominating the small island that lay between the famous and infamous halves of the great city. The greying man in the bespoke check-patterned winter suit removed his hat as he entered the Cathedral. The action held vague memory of etiquette and he briefly pondered whether the gesture conveyed respect or supplication.

A thousand tourists busily collected digital images using the required flash-suppression protocol. The advertised cantors were performing a psalmodic chant, providing appropriate ambiance to the venue as the whalesong does at the aquarium. The souvenir shop was already doing active trade as the PA system signalled Mass “Au nom du Père, du Fils et du Saint-Esprit”. The man was disappointed to feel little veneration in this venerated place so he – like the others – focused with awe on the architecture. END_OF_DOCUMENT_TOKEN_TO_BE_REPLACED